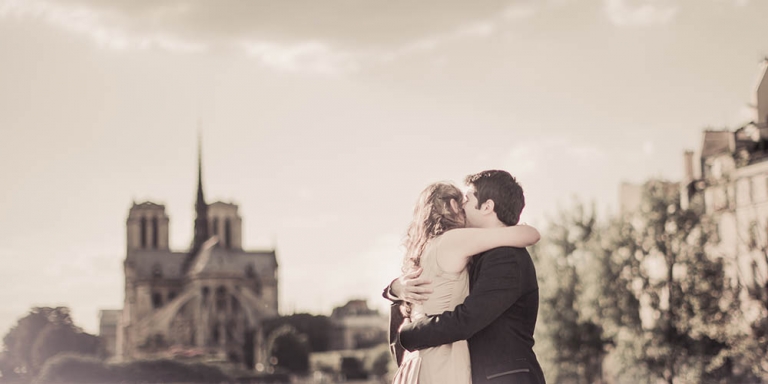 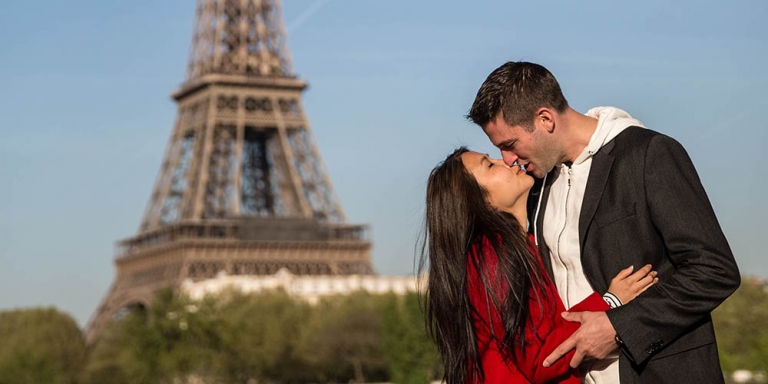 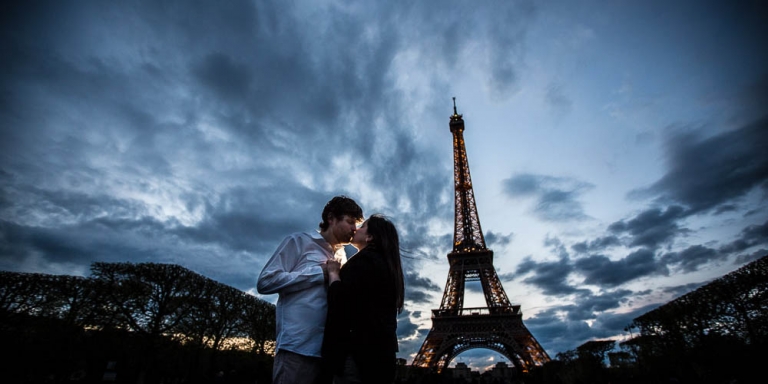 Having the Eiffel Tower as a backdrop is the first thing Donald and Maria asked me when we first met on Skype.

But sunrise in winter in France happens around 8:00AM. From that time until sunset, a lot of tourists enjoy most of the iconic spots. And having people hanging around on the photos background is something that I always try to avoid on our pictures!

This is where experience and Photoshop skills make a big difference between photographers. We do master guidance with clients AND editing with Photoshop 😉 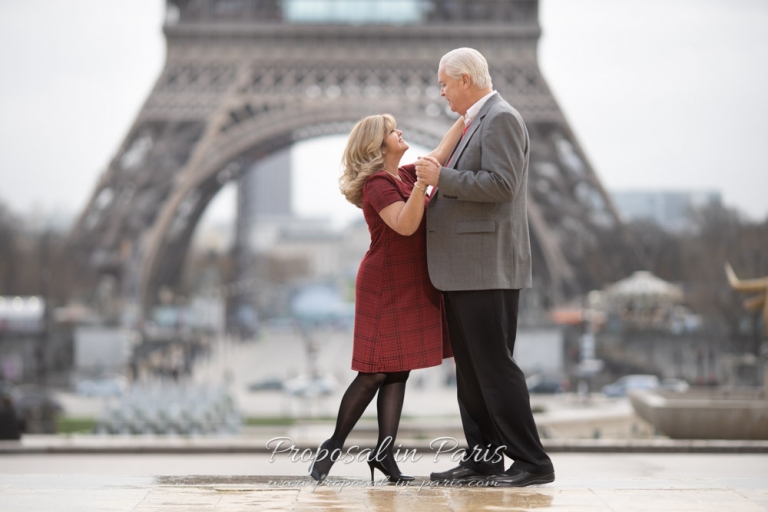 I first asked Donald and Maria to pretend they were great dancers (which is not absolutely true but that was fun). 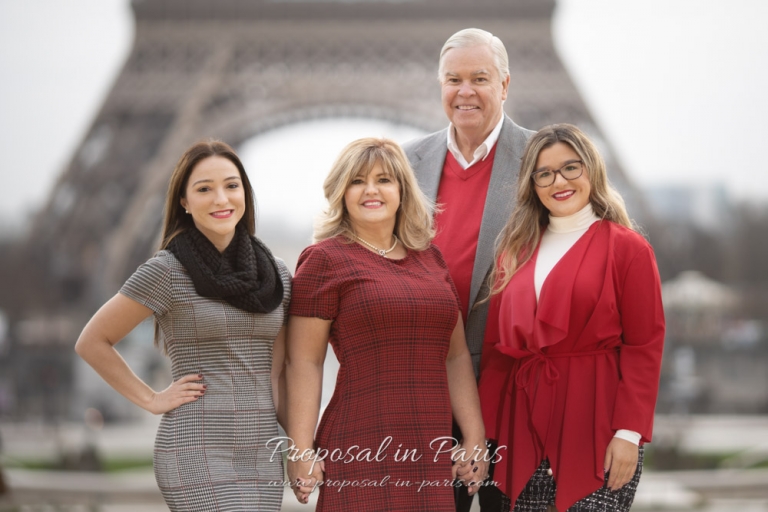 Then Maria’s two daughters joined them for a more classic pose. 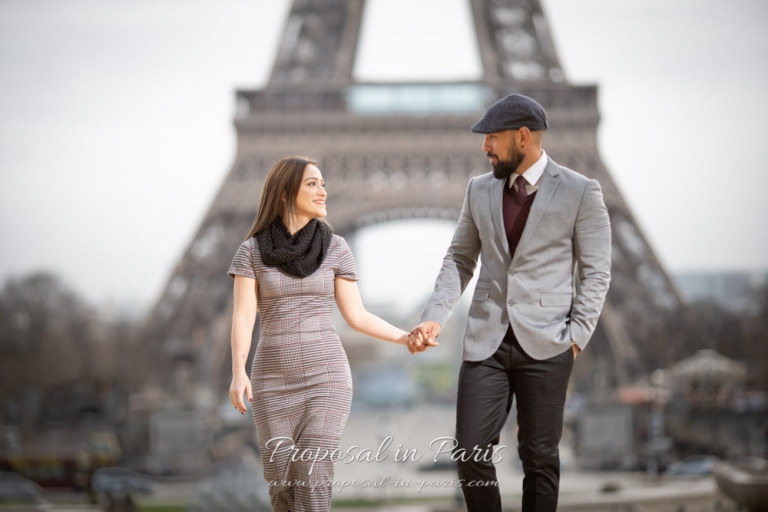 It’s important to take advantage of all the combinations of people when photo-shooting a family. 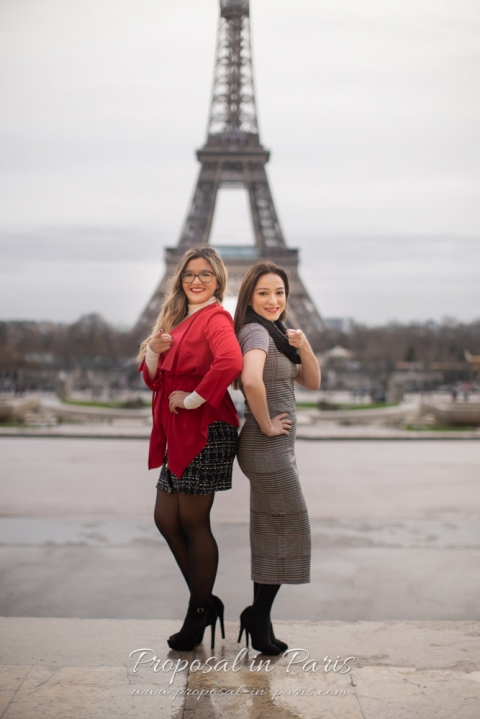 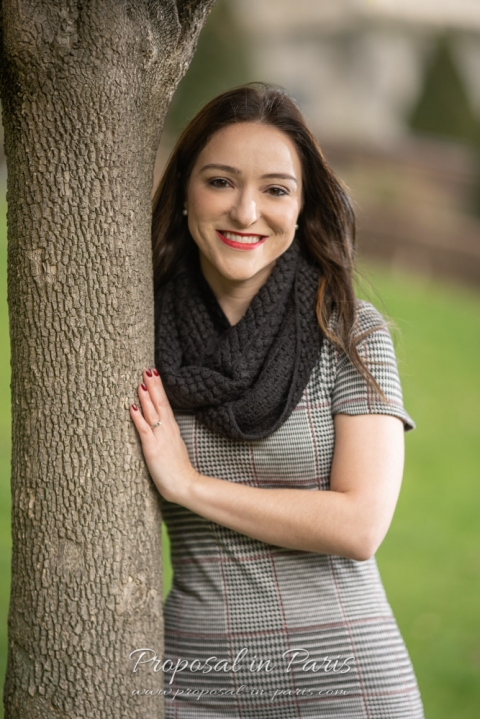 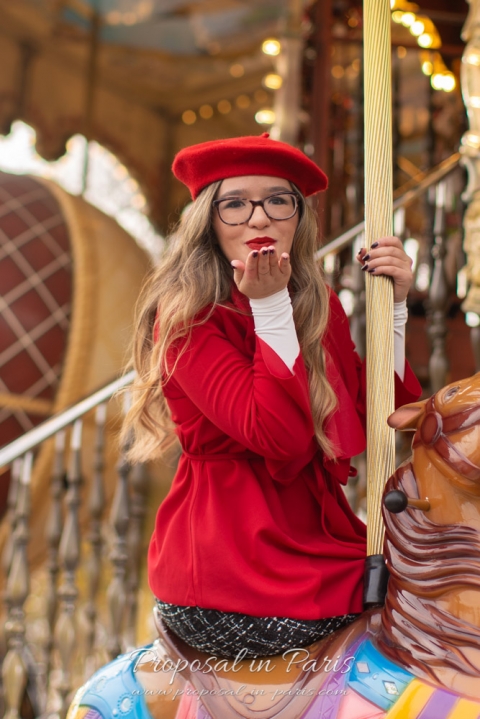 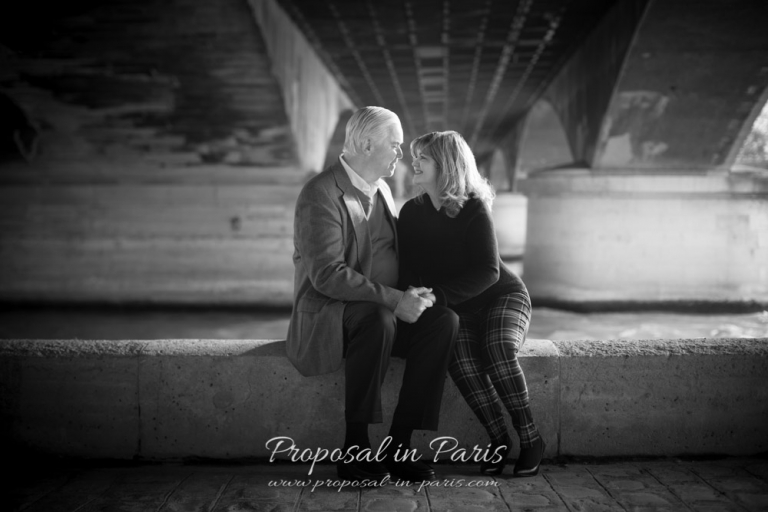 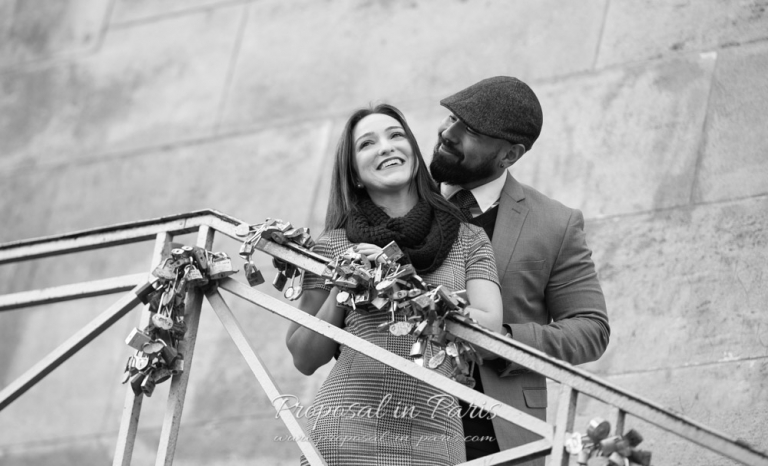 Montmartre is first known for the Sacre-Coeur Church with its white dome overlooking Paris. It is famous for its old streets and place du Tertre where all the painters showcase their art. But you can’t imagine how many proposals happen there. 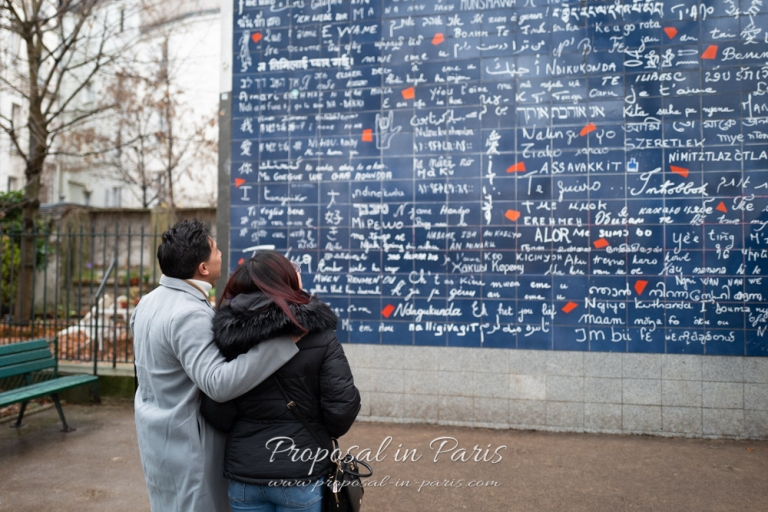 David had the idea to propose in front of the “Love Wall”. Unfortunately, he had to change his plans for a more quiet place. He wanted it to be intimate and they were way to many visitors there.

We agreed on moving to a quieter place near Sacre-Coeur Church. And he stopped by some nice colored stairs. 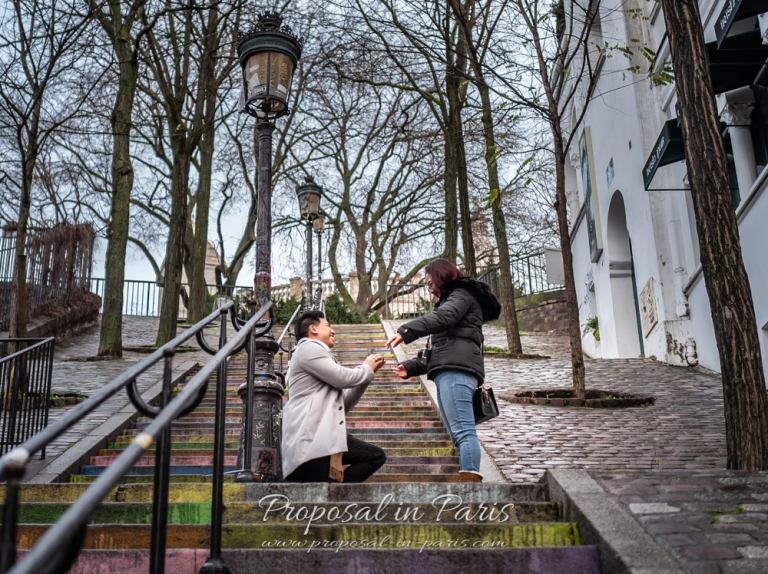 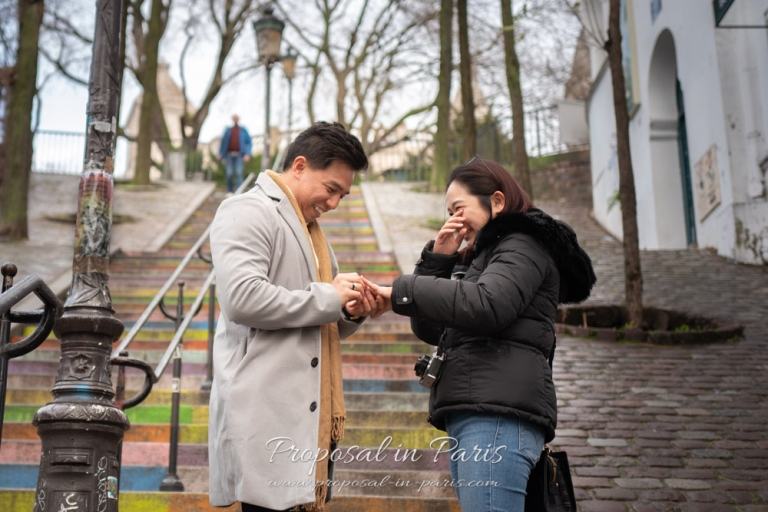 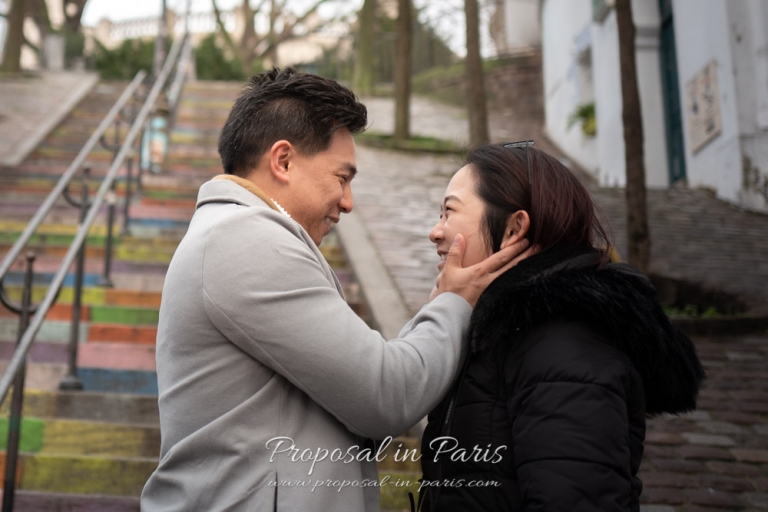 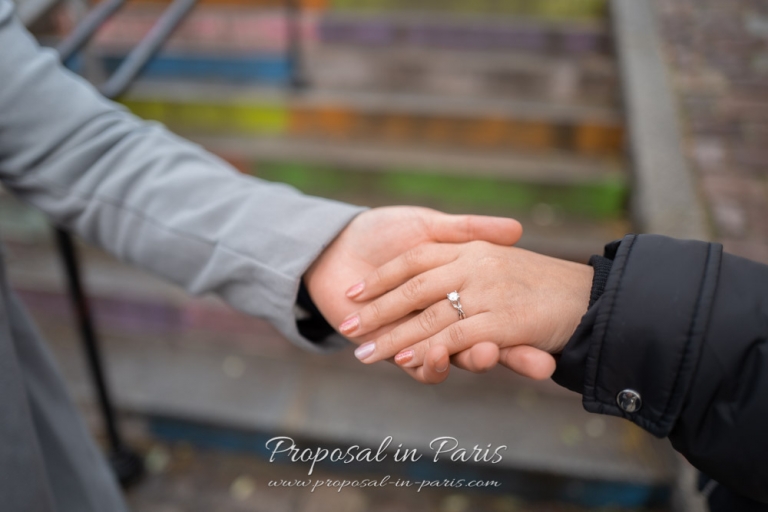 One photo I never miss: two hands and one ring 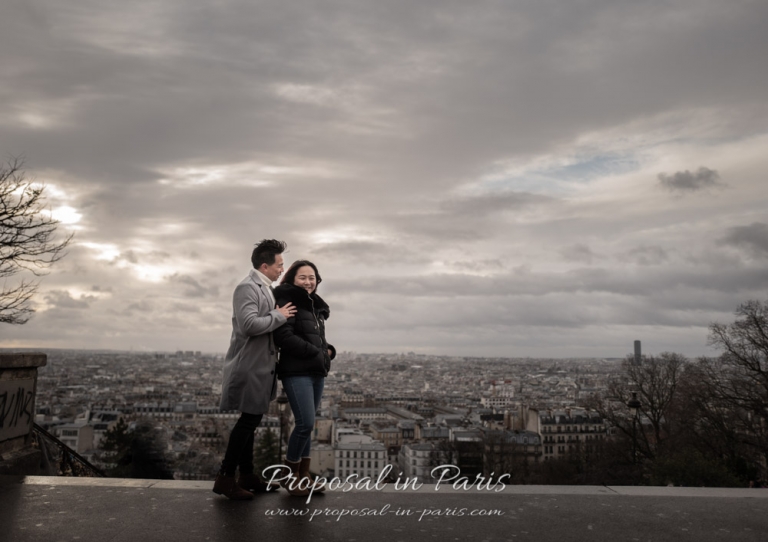 Shortly after the proposal, we moved to Sacre-Coeur heights, where the view over Paris is always amazing. The winter wind added to the romanticism of this picture. 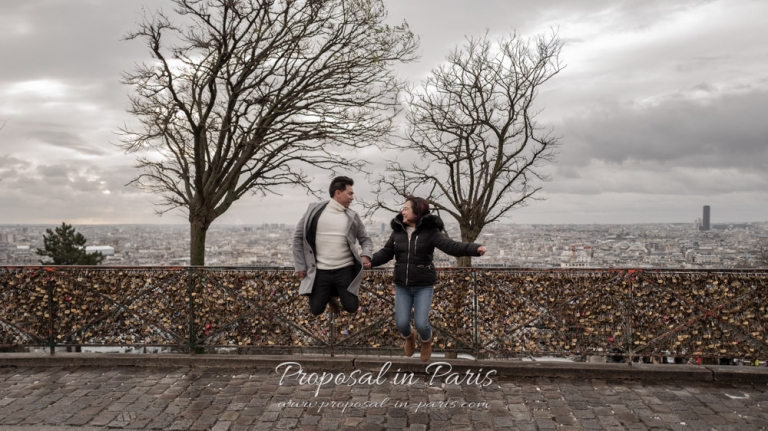 There is almost no love locks bridges in Paris, so this photo will become soon a piece of history! 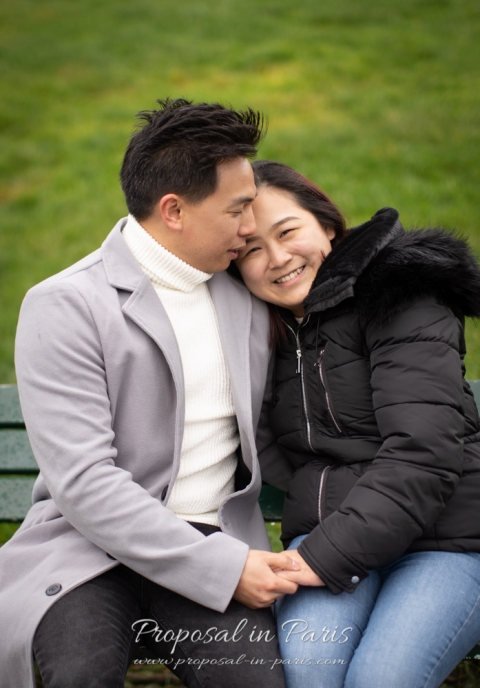 Then we walked down the Sacre-Coeur gardens and took many more shots using the stairs and one of the benches. It’s always quiet there in the morning. 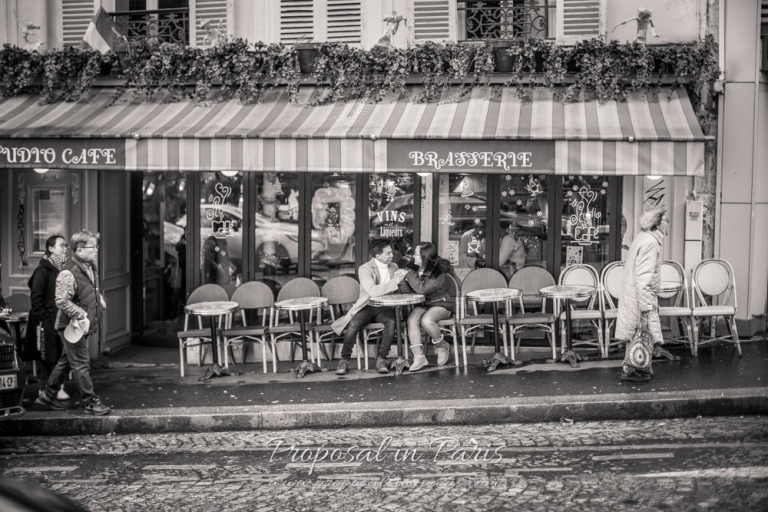 B & P – An engagement photo session that turns into a Marriage Proposal !

Beto had to find a good reason to ask his girlfriend to wake up very early on their first day in Paris.

I suggested him to offer her a photo session at sunrise. He accepted and then we secretly prepared together the routes and decided of the best place to propose.

To tell you the truth, I prefer hidden photos to start with, so the proposal itself is more intimate and the unaware girlfriend is not bothered by the photographer.

But in this case, that was the best option and Priscila was really surprised when he got down on one knee.

Beto knew me from his sister who’s been following us on Facebook and Instagram for a few years. Feel free to do the same! Follow us:

Jason and Louise – a winter sunrise surprise proposal in Paris

Although most of our activities increase in summer, it’s always a pleasure to photo shoot a proposal in winter. Jason lives in London and contacted us many months ahead to organize this early morning proposal. Louise was totally surprised: she expected something , but during dinner at night! The sunrise light was just perfect and gave a very special mood to these photographs.

Here is what Jason wrote us after the event:

“What to say but pure magic and romance has been captured forever by Bruno. I always had an idea that I wanted my proposal to Louise to be somewhere romantic and memorable. Paris had to be the place and so my research started. I accidentally stumbled across “proposal in Paris” and it got me thinking that this is it, this is the chance to capture the full emotion of a lifetime event. The reviews on Bruno just do not do him justice. From the moment I got in touch, through every Skype call and the plans and attention to detail just put me at ease. Bruno made me totally comfortable and prepared for this life changing moment. Bruno captured the raw essence of the emotion from both Louise and myself. Louise has absolutely no idea, however she was a little bit put out that I asked her not to wear her Raybans !! Bruno made me so relaxed that even I forgot he was there which allowed me to relax and enjoy the moment rather than it but staged. I cannot thank Bruno enough for capturing a moment of our lives that will never stop bringing tears of joy. Thanks Bruno! Jason and Louise”

Would you like to read some reviews from www.facebook.com/proposalinparis/reviews?

We pasted here down below the latest reviews from Facebook:

We use cookies to ensure that we give you the best experience on our website. If you continue to use this site we will assume that you are happy with it.I Agree