A proposal place du Trocadero in front of the Eiffel Tower

Javier and Stephanie are from Honduras. They planned a trip through Europe ( Italy, Switzerland etc…) and of course stopped by Paris for a few days.

Javier was in touch with us since January, and everything was carefully prepared. There was just one details he had not planned: he had asked Stephanie to wear her nicest and highest high heel shoes on that day… her feet were hurting and after we met the couple, she decided that was too much walk for the day !!!!

Javier was desperately sending me text messages, asking for an extra waiting delay and trying to convince her to move to the location we had planned for the proposal, nothing seemed possible!

After a while, I suggested to change our plan and move 500 ft away from the Eiffel Tower to Trocadero, and be in the nicest close area. And it happened!!

I always plan a lot of things in advance, but this was something that never happened in 4 years. Well, that is what makes my job so amazing: a proposal photo-shooting is always something unique… 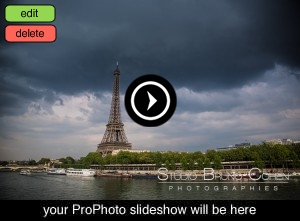