Today, we are not talking about those little red, blue and green chocolate candies, we are talking about Michael & Michelle, two American love mates from Washington D.C. (District of Columbia).

Whatever the weather is, rainy, sunny, snowy, cloudy… Paris remains as one of the most incredibly romantic city in the world. And so we can see with Michael and Michelle’s mood during this day. Have a look at them! They look so in love they could get married! Of course you know that they did, otherwise I would not be writing this article on the website called “proposal-in-Paris.com”… Maybe I would be writing it on a website called “proposal-in-Paris-but-she-said-no.com”!

But I digress, let’s focus on our subject, Michael’s proposal to Michelle. It took place on a bridge behind the Cathedral Notre Dame  de Paris under the rain, but the Parisian one! Which was beautiful, amazing and incredibly romantic for them.

After seeing the words “Will you marry me?” on Michael’s lips, anybody could say even today if it was joy tears or rain drops that flowed this day on Michelle’s cheeks… Maybe both?

The ring was beautiful, as you can see in the photo gallery, it was adorned with a blue sapphire that suited perfectly to Michelle’s finger… And to Michelle’s hand, arm and body of course! Actually it suited to Michelle. 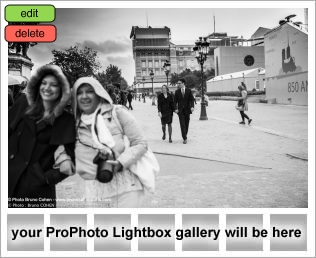 Before catching a cold, we gave to Michael an umbrella so he could protect his future wife from the rain. We took them by car from the bridge to the Trocadero’s Plaza where our photo shooting could get started under a more cloudless sky.

Of course we took hundreds of shots as usual, we walked around through Parisian streets and we went down on the Seine banks. We have chosen this style of picture with a lot of black and white for one main reason : it brought a new kind of atmosphere to the pictures which were taken during a summertime in Paris, a period of the year full of tourists. The atmosphere brought by this black & white “filter” marks the timeless elegance of Michelle and Michael, they gave off something terrifically poetic.

They loved the result of our hidden photo shooting during which we had great shots in great spots. M&M’s trip in Paris was a success for them as for us, and I think it is still today, a great recall.

We wish them well!