It’s been a while since we’ve shot a proposal at Alexandre III Bridge. I ussually recommend to photo-shoot on that Bridge in the morning light , but it’s never easy to convince my clients to wake up very early !

Ben and Kathryn had arrived from US in the morning, and after a little rest , they had a coffee at the Bristol Hotel in rue du Faubourg Saint Honoré. That’s where started my hidden photographer’s job. I was quite invisible hidden by my friend Milan and we walked near the couple for 15 minutes , following Avenue de Marigny (close to the French Presidency building l’Elysées) and Avenue Winston Churchill , then crossing the Champs-Elysees until we reached the famous Alexander III Bridge.

The proposal was set up to be at sunset , and it DID very well … Ben had written a little note on a paper previous to kneeling down , and Kathryn was totally amazed 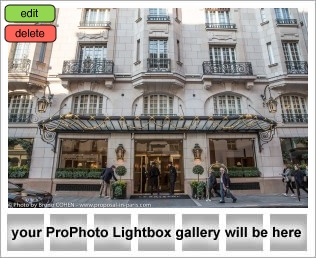 « Nice photos under the rain
A book from an portrait photo-session : why not? »