A proposal in Paris near Sacre-Coeur, Montmartre – K & V

Kane and Vicky live in Sydney, Australia. They had planned their trip to Paris just after a sunny holiday week in Puerto Rico. Of course , Vicky was NOT aware of Kane’s project of proposing there. Although they were not very religious, I suggested the area of Montmartre, with its amazing view over Paris, its Place du Tertre with all the painters exhibiting outdoor and its typical houses of the old XIX century. The main issue in that kind of very touristic place is to avoid loosing the couple. In that case , Kane was very good in preparing the path, and we managed to see each other almost all the time , even from big distances ( 300 feet sometimes ! ).

After the proposal itself, we managed to spend half an hour of photo-shooting in the area of Montmartre , on the stairs near the Funiculaire, a train that takes you from ground level ( Anvers Metro Station ) to the top of the hill without walking the thousands stairs !

On the way back , we stopped by the Eiffel Tower for a few pics at Pont de Bir-Hakeim and around Trocadero water jets.

I was helped by an experimented assistant ( Chloé ), who remained close to the couple , and could grab some good shot from the opposite angle.

Like I always suggest , we had planned the photo-shooting on their first day in Paris. The weather was sunny but if it had been bad , we could have done it later. It sometimes happen that we don’t have any other choice but shooting under the rain , but in that case, an assistant with an umbrella is absolutely needed 😉 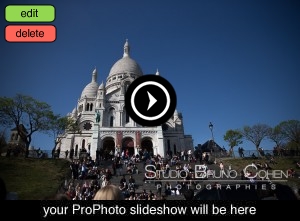