Originally planned at night , this proposal was delayed by a late train from London, so we had to postpone the shooting the day after in the morning.

Starting from Notre-Dame de Paris Church , we followed the couple walking along the Seine river.

Although we had carefully prepared the route with Desmond, he did not proposed where he was supposed to do , but my wife Kitty and I were 100% careful at all time , and when the moment happened we were far but ready to shoot the moment.

Then Desmond introduced us to his girlfriend , and we have spent together more than an hour , giving directions , walking and playing together.

Annabelle was very shy , but our way of directing gave her the opportunity to feel comfortable with the cameras 😉 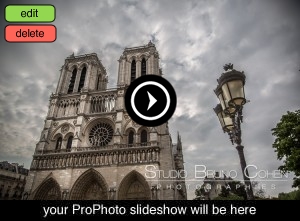 « A proposal in Paris near Sacre-Coeur, Montmartre – K & V
A proposal place du Trocadero in front of the Eiffel Tower »